Saturday morning dawned here in Bormio, after a night of heavy rain.  Not just any Saturday – this is the ONE DAY all year when Stelvio is closed to motor traffic, reserved specifically for cyclists (and, apparently runners too).  A 21km climb of nearly 2000 feet – a 2 1/2 hour ride for the likes of Don and Gary, both just coming off their high of competing at worlds (where Gary came 2nd in his age group, and Don put in a creditable 18th place in his first ever outing there).

But is Stelvio in the rain with no cars better or worse than Stelvio in the sunshine with cars?  Peter says the latter – channelling past woes of his worst day riding ever, some 10 years ago when he nearly froze to death on the downward return in wet clothes in freezing temps.

Six different weather forecast sites gave six different views of the weather – none of them perfect.  In the end, having waited for Don to assemble his bike, they finally set off around 9am, with a supply of dry clothes wrapped in plastic bags in Gary’s backpack – he at 75 being deemed the fittest of the crew, and most able to deal with the extra weight!  Peter did offer to take the pack…. 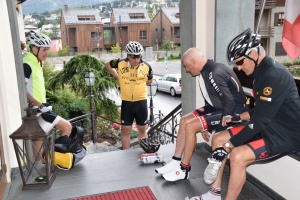 Setting off for Stelvio 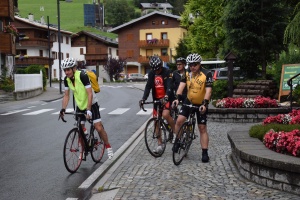 Long story short…  3/4 of the way up, Peter stopped to tighten up a loose saddle, the others having got well ahead of him, was struck by a fit of coughing, and decided it was sensible to turn around and head for home.  But, the big worry… What if the others were waiting for him at the top?

Lunch interspersed with “I just hope they’re not waiting” uttered more than a few times.  A text to Don was apparently by no means reliable, given that Don hardly ever looks at his phone, or may not even have it with him – now doesn’t that sound familiar?

Much relief to find three tired and happy cyclists back at the hotel sometime later – of course they didn’t wait; in fact it seems they separated as well, and Gary, dry clothes for all still in his backpack, headed back down without any of them!  Sensible man…

I, meanwhile, had a peaceful morning wandering in town, resisting the amazing aromas of Nutella crepes wafting down the alleyways.  Having finally tracked down a shop that sells postcards – I swear the only one in town – I discovered why they are so scarce when I bought the stamps.  At 2.50 euro, nearly NZ$5 postage  per card, it has to be the most expensive form of communication in the world on a cost per word basis!  Hope the kids appreciate the cards!

So with Peter snoring gently beside me – afternoon naps being very much the done thing here, in anticipation of another 5 course dinner, I will leave you with the view from our balcony, and get back to my book and my knitting.  Aaaah, holidays… 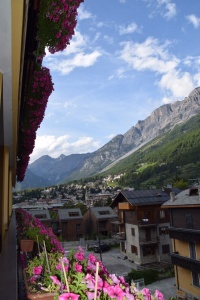 One thought on “To wait, or not to wait? That is the question.”