At the time, it was prompted mostly by being too idle to get out of bed to start my day with the cycle boys (and, if I am honest, being on a bit of a roll with Candycrush).  But 12 hours later, faced with a simple but delicious 5 courses of yummy goodness, there was a great deal of post-rationalisation going on.

A bit of fresh, fragrant mush melon wrapped generously in wafer thin ham to start, home made pasta shells with the lightest touch of bolognase sauce, lamb chops top cooked to perfection (even though our maitre’d was a little anxious about serving lamb to kiwis), a skerrick of Gorgonzola with honey and fat walnuts….   All topped off with a silky smooth tiramisu…. Heavenly!  And all this part of our half-board room rate at what has turned out to be the most perfect cycling hotel ever.

Not only is there a car park for the rental cars (by no means a given in this part of the world), but also a secure bike room, with cleaning bay and plenty of racking to store the precious two wheelers.  Best of all (at least from my perspective) is the fact that you get a mesh laundry bag each day for your sports gear which is taken away at 6pm and returned freshly laundered the next day, all part of the service.  Yay, no more smelly hotel rooms, bathrooms draped with dripping cycle gear, having been stomped clean in the shower with the help of the hotel shampoo!  This is all so very civilised!

And let me hasten to add, not costing us an arm and a leg either.  Just a lovely, family run establishment, with warm and friendly hosts who understand the value of attracting groups of crazy-mad cyclists, and seem to enjoy meeting their special needs.  Ten stars for Hotel Larice Bianco, I say!

On the cycling front, yesterday was Mortirole – by all accounts a truly brutal climb.  Perhaps a little optimistic the day after Stelvio?  Peter still recovering from his pleurisy, and Don pretty exhausted after a hard riding week, called it quits part way up the mountain – though probably both with a bigger ride under their belts than they get on an average Auckland day.   Gary and Alistair (Don’s son, who has joined us for part of the trip), slogged it out to the top, then down the other side, where they had a rather alarming unplanned excursion through an unlit 1.5km tunnel with cars whizzing in both directions at breakneck speeds.

if cyclists are crazy, Italian drivers even more so!  More about the tunnels and the drivers another time.

Some very tired people last night.  Mind you, didn’t stop us having a very robust conversation over dinner about the state of NZ politics, and the fat German.  I have to say, I wish I could have Gary’s faith in the electorate doing the right thing!

I have to say, following the commentaries online from a place where it’s easier to see the wider world view, I am losing the will to vote!  Anything you think I should see before Election Day, please feel free to pass on!

Until then, I will continue to enjoy my little bubble away from the world, filled with mountain air, daily helpings of gelato, five course dinners, enough (but not too much) sultry red wine – Nebbiolo in this part of the world, and some good long walks to make it all okay! 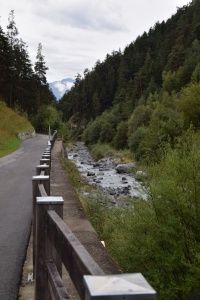 Not a bad place for a Sunday morning stroll

One thought on “Food, glorious food”