I often think that the only disadvantage we have, living in New Zealand, is that everywhere is just so bloody far away (well, everywhere that counts, anyway) – and some might say this is an advantage!  What it does mean, of course, is that getting to those far flung places still on the bucket list takes time, effort and energy.

Perhaps we’re just getting old – but this year our pilgrimage to Europe started with what I was calling a ‘slow plane’ to Athens, stopping off at Singapore for an extended 14 hours stopover (longer than intended due to airline schedule changes after we’d already booked).  Never mind – we thought having a full day in Singapore, one of our favourite places from past travel, would break up the long journey, and give us time to start re-setting our body clocks.  In fact, what it meant was that we were just doubly tired, in fact completely exhausted by the time we arrived in Athens (via a short stopover in Istanbul to change planes).

But before I get to Athens, a few observations.

It was great to see that Peter hasn’t lost his touch at staring down officious wait staff who take that “sorry we don’t have a table for you” approach, when the restaurant (in this case the breakfast room at Raffles Hotel in Singapore) is visibly heaving with emptiness, and our man simply thinks that because we’re not staying in the hotel, we might not be able to pay for their generously priced a la carte menu.  “Perhaps you’d like to look at the menu before I prepare a table” he offered weakly in response to Peter’s stare-down.  Harrumph!  Sometimes it’s just so rewarding to flash that Platinum Visa Card (but only at the end of the meal, of course – and he wasn’t to know they’re a dime a dozen in New Zealand!)

A bit of retail therapy confirmed that the store we’re most missing in New Zealand is NOT, as some may think, Ikea, but actually UniQlo.  Please please find yourselves a site in Auckland!

Oh, and a message for Air New Zealand who helpfully prepared all our boarding passes at check-in in Auckland.  Yes, you’re still fabulous compared to other airlines (though the gap is closing, as you join the downward spiral of waning customer service!)

But it’s the little things that count, especially when, like me, you’re a Star Alliance Gold traveller choosing to fly Economy Class.  I know that’s my choice, and I long long ago gave up hoping for an upgrade, BUT seriously:  In what parallel universe is it okay to seat your apparently most valuable customers in Row 41 of a plane that only has 42 rows.  By then – the last leg of our journey – I had completely lost any sense of humour or rationality, and was just deeply pissed off!

And so to Athens…. a city of ruins, of amazing tomatoes, of streets teeming with tourists (still, in September), of unbelievably bad parking in narrow streets which seem almost permanently gridlocked…  and pickpockets.  Having traveled the world, including some pretty crime ridden places like Johannesburg and Rio, having evaded a gang of thieves who targeted us in the old market in Buenos Aires, having that sixth sense from growing up in a highly security conscious environment, I can honestly say we have never encountered such an orchestrated organised gang of petty thieves.

They bundled us, literally, into a carriage on the Metro on a train that we knew was going in the wrong direction.  About 10 men surrounded Peter, apparently “helping” him with his luggage as the doors were closing, having shoved me into the carriage and out of their encirclement…  I knew it wasn’t right, knew we had to get off the carriage at the next stop, but by then the damage was done.  A secure travel wallet had been opened, and the zipped bag of cash extracted – so slickly that Peter was completely unaware it had happened when the train drew to a halt in at the next stop and we both shoved our way out, up onto the street and into a waiting taxi.  We thought we’d had a lucky escape!

I’m pretty sure it was the effects of our long journey – tiredness and inattention – that made up such easy marks.  I asked Peter “what did they get” – nothing, he said, that’s why I have this secure travel wallet…  but lo and behold, when he opened it to pay the taxi, the cash purse was ALL GONE!  Bastards!  Thankfully the cards (and passports!!!) were still there – as a slightly concerned taxi driver, mostly concerned that he might not be paid, drove us through the snail-like traffic to find the nearest ATM.

Oh dear!  It could only improve from here – although I have to say I didn’t think it was improving much when I discovered a spiral staircase of 45 steps up to our apartment, and a cold shower.  The latter was quickly remedied by reading the host’s instructions to turn on the boiler – instructions that our fellow travelers had apparently missed – the stairs, however, remain firmly in place.

As an aside, Greek plumbing is interesting, and probably the topic of whole separate post, with photos, in days to come!

On the plus side, the bed is comfortable, our four fellow cyclists are not complaining – though I suspect they were hoping for something a little more like the gem I found in Girona last year – and there is plenty of food in the surrounding streets.  A HUGE bonus for me and Peter was to find a truly professional coffee roaster, serving the most amazingly crafted coffees from SIX AM in the morning, just one block away!  I was his first customer this morning.  Only one small suggestion for improvement – “Coffee Dive” is probably not the most customer-attracting name (though perhaps it means something else in Greek).

And while we’re on the topic of names,  then there’s the lovely effusively welcoming Harry, at Gods’ Restaurant. 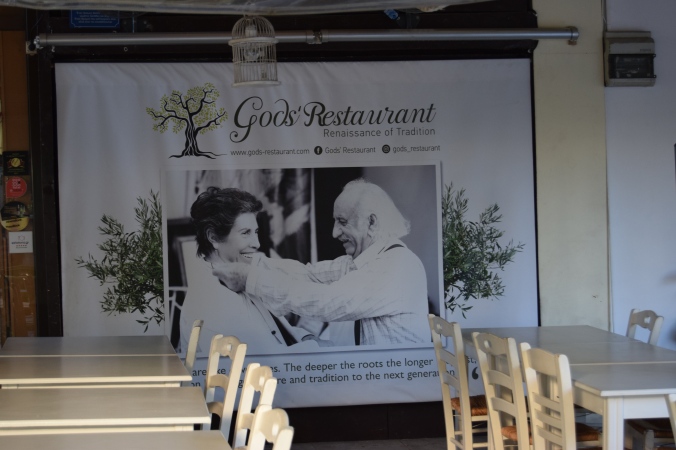 With a menu running to about 10 pages, he simply asked “what do you feel like eating, are you hungry or not so hungry” and then made beautiful recommendations – and came through with some very drinkable local wines as well.  Not all of our party took to this style of eating – menus are for reading and considering after all – but some of us were just relieved to have someone else telling us what to eat (My Food Bag, anyone?)

So to bed…  some 60 hours after leaving Auckland, we were pretty much asleep before our heads hit the pillow!  Up next, cycling, with a  bit of history on the side.

One thought on “Welcome to Athens, with a gang of pickpockets on the side”