A perfect addition to any holiday – an amazing specialist coffee store, with its own roaster, just one block away, AND they open at 6am.  Great start to the day (sadly, discovered the following morning that this does not apply on weekends). 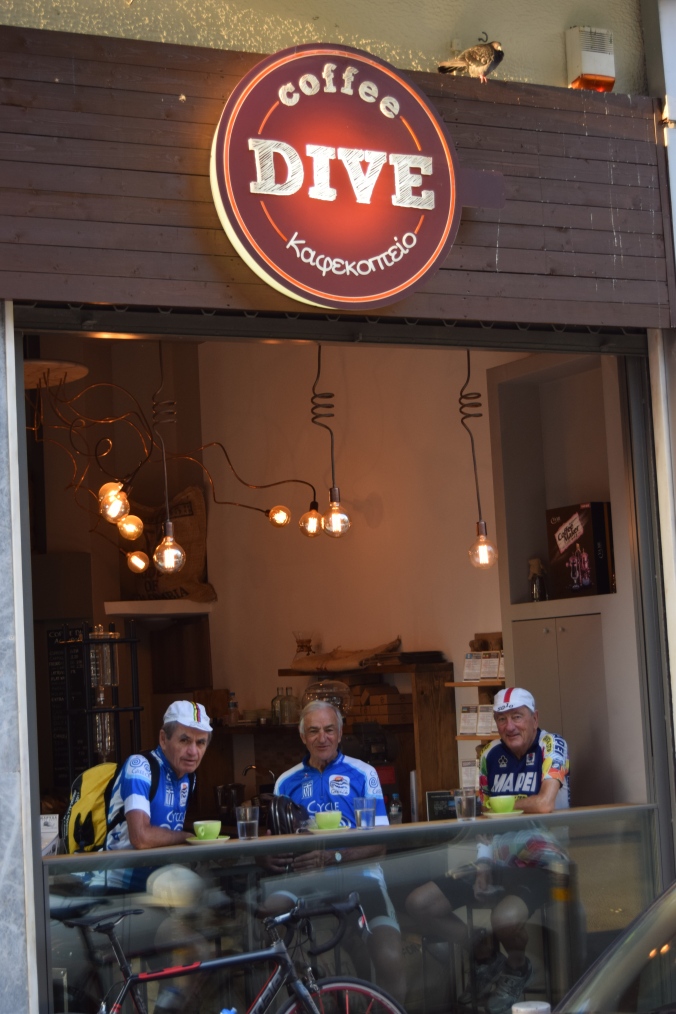 So onwards and upwards to the actual purpose of the trip – time to get on that bike.  My tour-provided e-bike is ALMOST a replica of the one I have back home, just without the Cannondale logo.  A trial run doing a 3 hour ride around Athens – thankfully 90% off road, meaning the only challenge was navigating the pedestrians who pay not one blind bit of attention to my madly dinging bell as I pull up behind them.  A minor spill – no damage done to me or bike – as a pedestrian pushed me into a kerb;  my trusty sweeper guide said “good, you know how to fall”!  I laughed and assured him I’d had plenty of practice.

Colleen our guide – an American lawyer who gave up her law practice to move to Athens 14 years ago – is a mine of information;  with a delivery style best described as “enough but not too much”.  We did a loop mainly on the Acropolis walkway, taking in points of interest along the way.

Socrates prison – a cave in the rock with iron bars, where he was incarcerated for corrupting young minds with thinking stuff;  the Pnyx, a completely unassuming ‘field’ where the first democratic assemblies were held – 14,000 people, men only of course.  A side excursion to see a ceiling painted by the man who will be our driver on the tour;  a brief stop of Syntagma Square to view the tail end of the very elaborate changing of the guard (basically men doing what could best be described as dressage).  Most fascinating was the ordinary soldier, who when the two guards had come to a stop at their guard houses, visited each in term to arrange them in exactly the right place, straighten their shoulder pads, hats and particularly tassels, before inviting the crowd up to take photos (but not too close).  As soon as anyone got close enough to be in the picture, the guard would bang the base of his rifle on the stone to summon the soldier to remove said intruder.

Realisation of the day – if you can’t pave your streets in gold, why not just pave them in marble!  Great for maintenance, but bloody hard on the feet.

The obligatory greek salad for lunch – did I say that the tomatoes here are amazing, possibly the best part of Greece so far?  And then “home” for a lazy afternoon (or in Peter’s case, a bit of a catchup on work stuff).  I really do need to get some done myself, but taking a surprisingly Greek attitude to that (“domani” or some such thing).

Useless fact – on the 1st day of the months, Greeks use a special greeting – happy month – when they greet each other.  Sure beats “a pinch and a punch for the first of the month”.  Note for Isabel!

Our week long cycling tour began with a 6pm briefing, and a meet your fellow travellers session at the rooftop bar in the hotel where we were meant to stay before Debra decided to AirBnB it.  The kiwi contingent arrived early, thinking we’d have a beer together before the others got there – but no, sorry, we’re not ready for you (despite other guests having drinks), and no you can’t sit in the shade, we’ve made your space over there (in the blazing sun).  The words “naff off” passed some lips, as we gathered a bunch of bar stools and sat in the middle of the thoroughfare in front of the bar, defiantly ignoring the consternation this was causing.  “Wow”, said Stefan, “if this was a Kiwi bar we’d all have a beer in hand by now.”

Discovery of the afternoon – the Kiwi sense of humour is going to be a challenge for our three Californian fellow-cyclists, and our Greco-American guide for that matter.  Peter’s suggestion that we chuck Don and Gary (the oldest cyclists ever to do this tour) out at the bottom of the hill (we start at the top) so they can warm up before the start was met with bemusement.

More about the cyclists later – next stop dinner with Stefan and Peter, just the three of us attracted to a rather gorgeous restaurant, appropriate named Sense – and boy, was it a treat for the senses!  A balcony table (so long as you leave by 9.30pm) overlooking the Acropolis as the sun set in the background, fine dining service and food to match, and of course, great company. 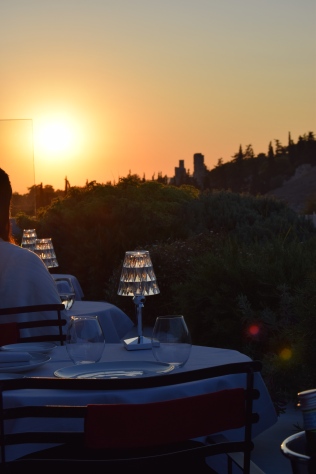 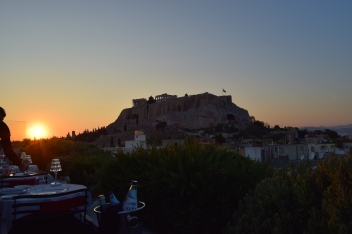 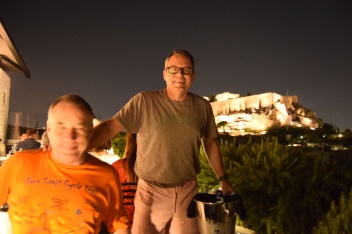 I’m still salivating over the pigeon (breast and leg, perfectly boned out) with smoked vegetable accoutrements;  the boys had suckling pig – a shared mouthful confirmed this as definitely the next best choice. 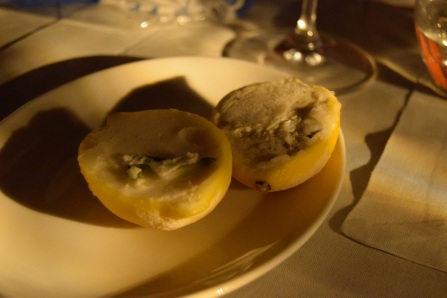 And can I say – who knew about olive oil ice-cream, well, semi-freddo (served in a frozen lemon shell, with another filled with a lemon sorbet which would have been the pick of the night, but for its friend on the plate!)  I NEED that RECIPE!

Leaving the wine choices to the waiter – we are, after all, Greek wine virgins – was an excellent decision with two fabulously different bottles of gorgeous red wine, perhaps served in the wrong order, but he wasn’t to know about Kiwi drinking habits, after all.

All in all, a very good day…  and looking forward to hitting the road to Peloponesia and first stop Nafplio for two nights.