After just over a week with my quartet of men in lycra, it took surprisingly little effort on Peter’s part to persuade me that I would see a lot more from a bike than on foot. So walking plans went out the window as I saddled up on one of the hotel mountain bikes and took to the disused rail trail that runs up into the hills above Cortina.

Actually, I discovered later that it runs all the way to Dobbiaco to the north of us, but 29km was a tad too ambitious for me. In fact, just a few km in, I was seriously missing the “lady saddle” I have on my bike back home… And today I have bruises to show that a “racing saddle” on a mountain bike is definitely not for me.

The scenery was indeed spectacular, and of course I did get a lot further up the path than I would have walked! 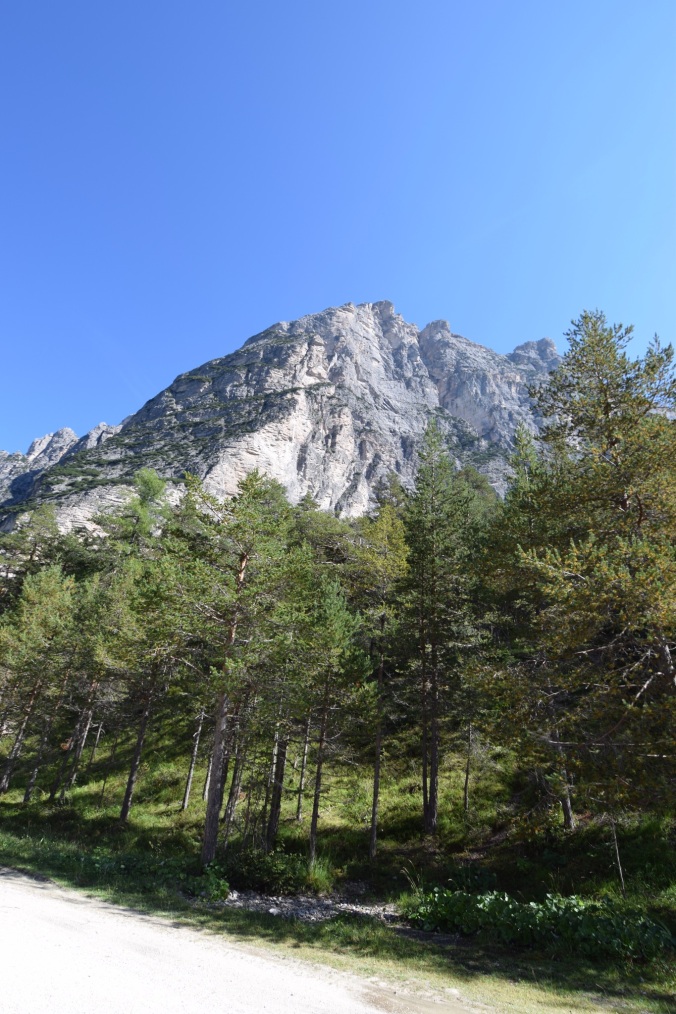 The trail is full of history, interspersed with myths and legends. This hole in the rock up above is said the be the hole through which the devil escaped the valley when Christianity arrived!

But more recently, and certainly more factually, this is the area of the shifting frontier between the Italian and Austrian forces in WW1. A lot of 100 year memorials going on around the towns and villages too. The hiking map I’m using has all the frontiers marked out in coloured barbed wire! On my ride, there’s a bridge… One of those relocatable feats of engineering – I heard Sid in my ear saying “we call it a Bailey bridge”. Unfortunately very well ‘protected’ from stupid tourists who might be tempted to throw something (or themselves) down down into the gorge below, so what would have been spectacular photographs remain uncaptured.

I crept tentatively down the side, off the path, to get this one… 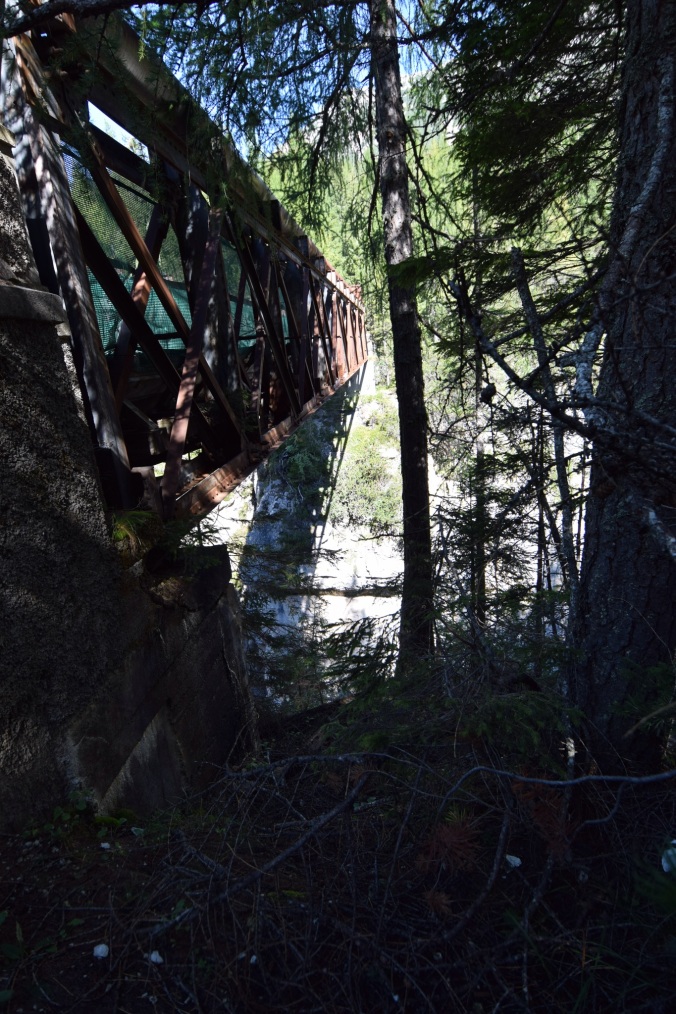 Along with the story of how it was destroyed by the retreating Italians only to be rebuilt by the advancing Austrians! There must be easier terrains than this on which to wage a war! 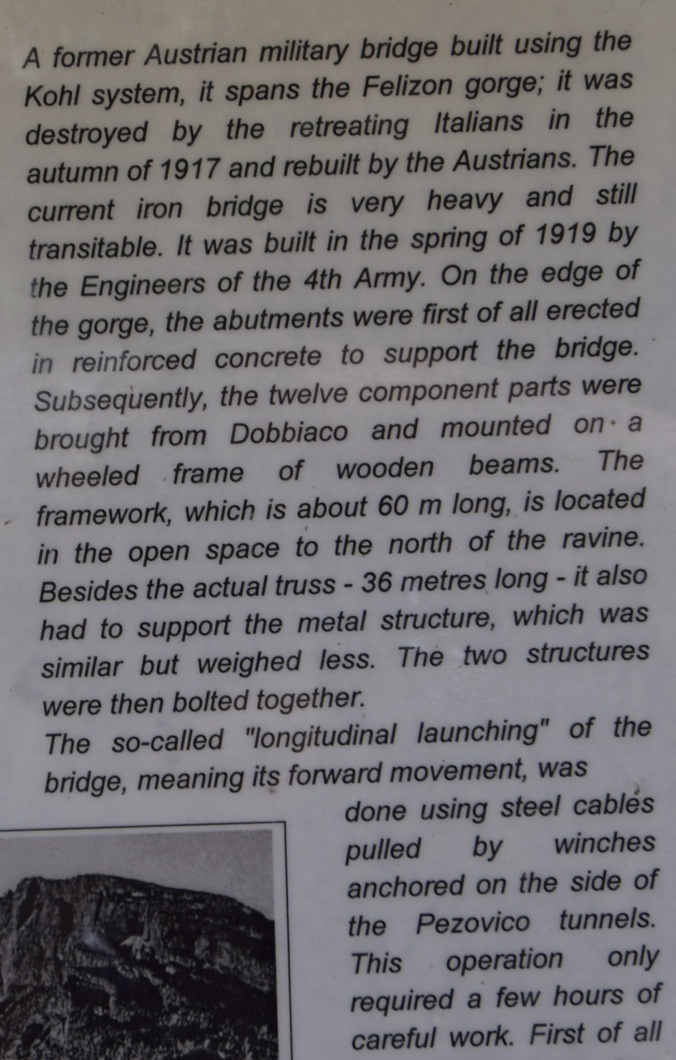 “Only a few hours of careful work”!!

And while we are on the subject of engineering, it would not be Italy if there wasn’t a tunnel along the way, preferably more than one. The highways and byways of Northern Italy are comprehensively punctuated with tunnels of all shapes and varieties, well constructed and lit (or not). Clearly in Italy road builders live by the old bear hunt mantra… Can’t go over it, won’t go round it, must go THROUGH! And even on this lowly cycling / walking trail, at least a couple of tunnels for good measure!

Inside, wet and cold and eerily silent. And scarey! Even the lights in this one didn’t in any way mean you could see the roadway. You just cycle along, hoping like hell you’re not heading for a major pothole or crevasse!

And the next one even darker – unlit presumably because it’s shorter so you can almost see one end from the other (if you could see around bends of course! 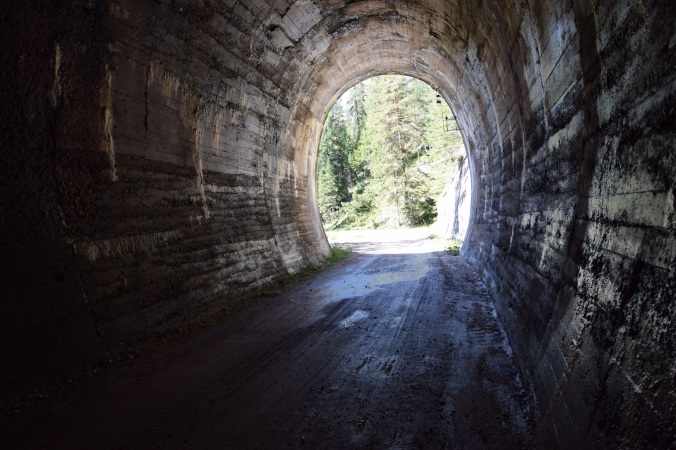 But outside the world remains beautiful! If was only when I turned for ‘home’ at around the 8km mark – my butt being simply too sore to continue – that I realised I’d been riding relentlessly uphill for all that time. Great gearing on this bike! The whizz downhill, and the fantastic vista before me, tempted me to continue flying down the hill all the way into the village (another 2km), where I settled into a comfy outdoor chair for a bit of refreshment. Coffee with a view!

All in all, a very worthwhile 20km – a drop in the bucket compared to the 100km plus days the boys have been riding, but satisfying nevertheless. Today, I’m back to walking – fewer views, but easier on the body!

Just when I think I can’t possibly take another photo of the scenery, it serves up something like this – sunrise from our bedroom balcony! This is the pinky pinkness of the Dolomites…

The man in the information centre was right. There really isn’t anything much to do here, apart from walk, hike, ride and climb – but if you’re not into the hiking, tiding or climbing, it makes for a pretty relaxing, and inspiring, break from the real world.