I have been known to potter about on a bike, most recently on my beautiful new Cannondale e-Bike, bought in anticipation of this trip.  And (many years ago), proudly conquering 500km of “Big Sky” in central Otago on a real bike…  but that was then.

Now, in Athens, is now – a few days after the end of a week-long tour through Peloponese, a relatively unknown and somewhat untouched part of Greece, steeped in millennia of history going back some 4,000 years.  Combining archaeology with cycling seemed somehow apt – but lack of local knowledge dictated that a supported tour was the way to go as opposed to our more usual Peter-planned European excursions.

This is an annual excursion.  However the cycling boys (previously dubbed Grubbs – generally retired or unemployed biking buddies) who usually muster at least 8 to 10 enthusiasts to climb high mountains in the Pyrenees, Alps or Dolomites, were less enthused by Peloponese (or maybe by Greece in general).

Only 5 intrepid Grubbs signed up for the Cycle Greece tour – plus me!  The “solution” for non-cyclists being an e-Bike.

Briefing!  And meet our fellow travellers.  Six Kiwis plus 3 Californians (“don’t call us Americans”).  It started badly – the venue, a hotel rooftop bar, decided it was unacceptable for us to gather in the shade because they had “set us up” (no visible evidence) in the blazing sun.  Unhappy, hot and sticky, jetlagged…  not a great basis for a first meeting.

Introductions revealed little – apart from Gary who talked about the last time he’d been in Greece, supporting his daughter to win Gold in cycling at the 2004 Olympics.  Immediate awe from the non-Kiwis amongst us (of course, we’re already in awe of Gary who is still the strongest cyclist of this bunch and about to turn 80!).  Much googling of the women’s individual pursuit in 2004 ensued!

Joining Peter and I (retired – not!), Gary, Don (almost Gary’s age – also awesome!), John and Stefan (the youngest of the crew), we had Ted (a mortgage broker), George (to be dubbed “the late”) and the lovely Emily (treating herself to her first holiday away from her law firm without her ex).  Definitely a motley crew – and as I might have mentioned, a challenge for the rest to keep up with our sense of humour.

Colleen, our guide – a US convert to all things Greek (philhellene), living in Athens for more than 10 years – and Pete our driver and great bike mechanic, rounded out the group.

Most important question not asked:  “if I give you written instructions, will you read them?”  Would have solved a lot of angst during the trip to know that the answer was, in the main, a resounding NO!  In fact, turns out the thing this group most had in common was that they DID NOT LISTEN to anything at all, making for an interesting week to come!

An early morning coffee before pickup at DIVE – definitely the best coffee in Athens!

Logistics!  Packing 10 cyclists, 10 bikes and a large assortment of luggage into a van and a car in the narrow parked-up streets of old Athens is a mission, even at 8am.  Unsurprising really that something went wrong – poor Gary arriving in Napflio to discover all his worldly goods (ie. his clothes!) had gone with his cycle bag to the warehouse in Athens for storage.  The first instance of NOT LISTENING!  Everyone else was pretty clear that he was meant to REMOVE his gear from the bike bag before we parted ways with it.  A happy ending – back in Athens the clothes (in two New World cloth bags) were put on the last bus to Napflio, arriving at 8.30pm, thanks to the resourcefulness of the Cycle Greece team! 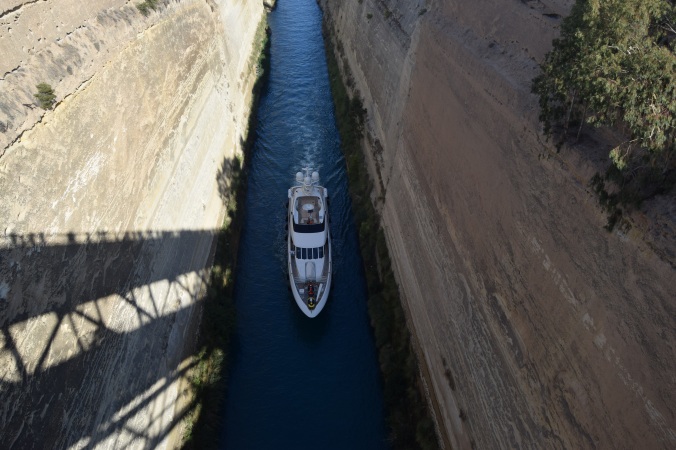 A brief pit stop in our 2 hour car journey at the Corinth Canal – a masterpiece of engineering turning the Peloponese “peninsula” into an island!

Onwards to Sofikos, where we all hopped on our bikes, by now in 34C heat!  What should have been a short 34 km ride to Epidavros Theatre turned into a heatstroke nightmare for Peter, who collapsed on arrival and didn’t get to see the amazing ancient theatre, complete with an amateur theatrics group visiting from the UK, reading Shakespeare in the centre to demonstrate the incredible acoustics. 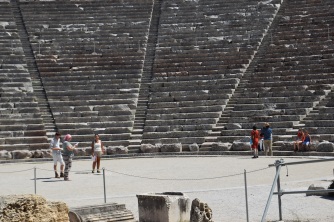 And so to lunch – anything cold! –

…with another 30km to ride afterwards, into the prettiest town in the Peloponese, so they say.  Napflio did indeed live up to its promise, with a lovely hotel overlooking the seaside.

A brief stop along the way at a 3,000+ year old stone keystone bridge… or if one is to believe our tour guide (who has an MA in history after all), probably built more than 10,000 years ago by a very advanced civilization with supernatural powers to make rocks momentarily light enough for one man to lift into place!  Seriously, I kid you not… back at the bikes, other girl on tour turned to me and said “no, I think you’re right – they used levers”.  One of those “I’m an engineer” moments! 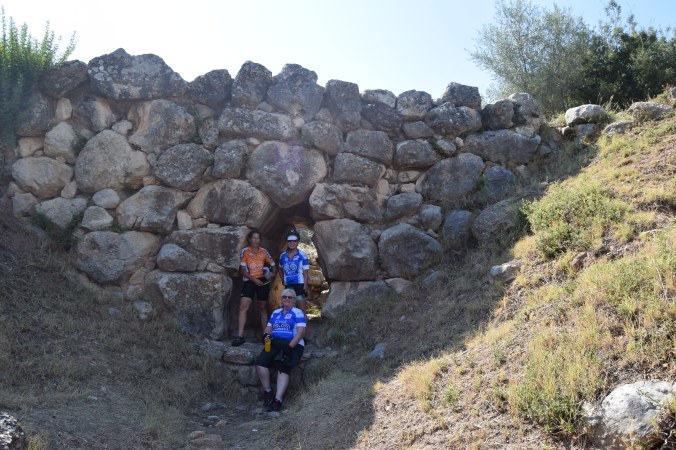 We lost a few cyclists along the way, who failed to read the instructions properly and stopped at the wrong bridge, with an off-road excursion (what about the “beware of thorns – don’t take the bikes off the road” instruction?) resulting in a flurry of punctures!

Nafplio was full of weekend visitors, with a music festival on.  Visiting dancers from Crete giving a concert on the square outside our hotel drew massive crowds while we settled in for our first of many similar dinners – a veritable feast of ‘snacks’ to start, leaving little room for main course, and none at all for dessert.  I fear our hosts were offended by our exhaustion as one by one we snuck off back to the hotel! 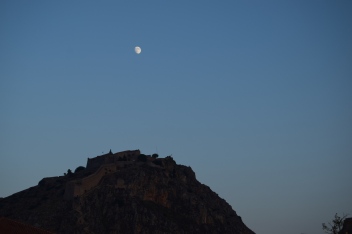 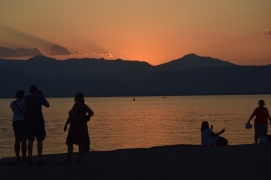 4,000 years of civilisation on display – a truly amazing site and sight.  Inside the ancient tomb – no artifacts but one could still marvel at the feat of engineering on display. 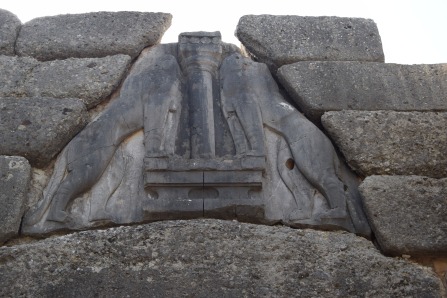 Then up the hot hot pathway to the lion gate – it always bemuses me that male lions are used to symbolise guards and the gate when frankly in my experience of observing lions in Africa, the male of the species does precious little other than lie about!

What is incredible (for me at least) is the metalwork – in gold, bronze and (eventually) iron – from these ancient times.  No wonder there is a temple in Athens dedicated to the god of metallurgy!

A bit of a wine tasting that evening – including something sweet for Don – hit the spot before another excessively front-loaded dinner!

Thank you, but NO thank you!  Peter, still suffering from heat exhaustion took a raincheck, and I ‘loaned’ Colleen my e-Bike, for a peaceful day spent driving the van, watching our fellow cyclists slogging their over-heated bodies up and down high mountains, and up and down again. 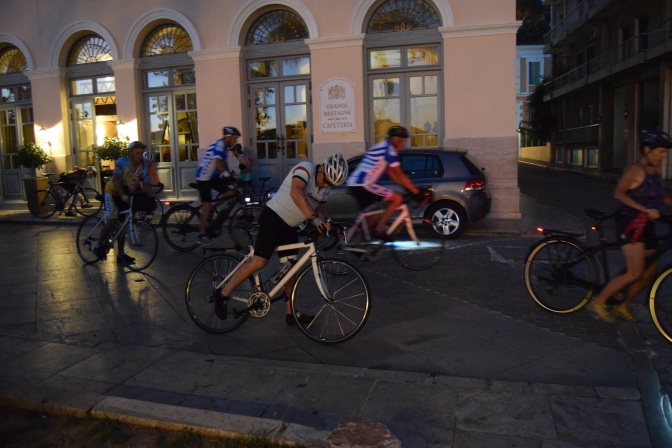 In recognition that this was a very long day, we left the hotel before sunrise, heading to Tripoli – a town of no redeeming features, but the only reasonable place for lunch (donuts!).  A rather depressing town, full of Greek men drinking coffee and reading newspapers strung up on washing lines outside the news agents (presumably because they can’t afford to actually buy one); and the occasional Greek woman popping into the elaborate mini-chapel at the base of the Church steps, presumably to pray for better times (or maybe more productive men!) 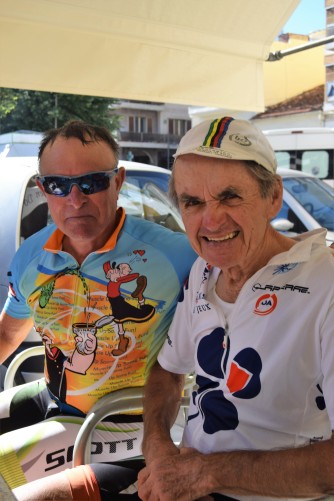 And so back to the bikes for yet more climbing, higher and higher… to the most fabulous hotel of the tour in Dimistana, a beautiful old stone building with gorgeous rooms overlooking the gorge. 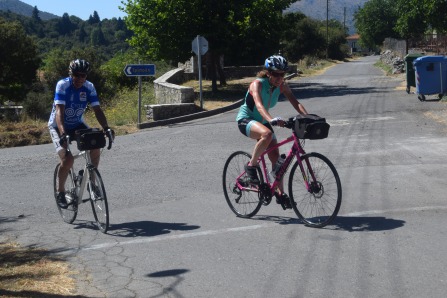 A special occasion – Don’s 79th birthday – demands champagne!  What a palaver to get champagne – are you sure you don’t want Campari & soda instead?  Only a few euros each vs a massive price tag for Moet?  Heavens!  Well done Peter for making sure we had proper champagne to toast Don’s birthday, and a quickly-melting ice cream cake at the end of the meal too!  The locals no-doubt thought we were quite mad! 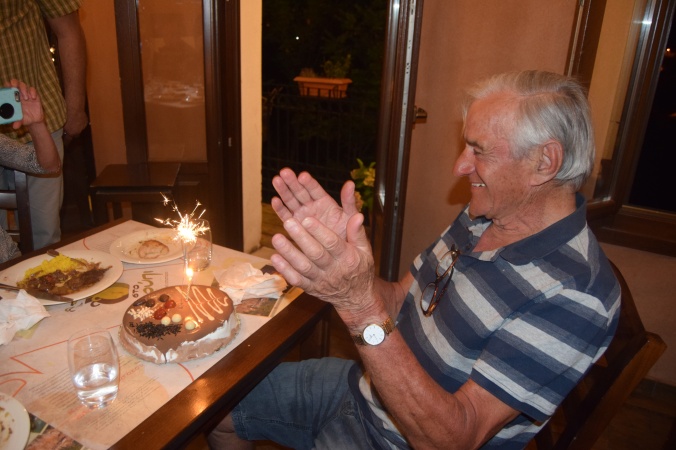 Every hill climb has its reward (even for those of us who didn’t actually do the climb) – and so we left Dimistana (in a chilly 15C temperature for which I was perhaps a little under dressed!)

A leisurely ride, more to our taste, with plenty of coffee stops along the way – now that’s more like it!  Even time to buy some honey – there are beehives everywhere! 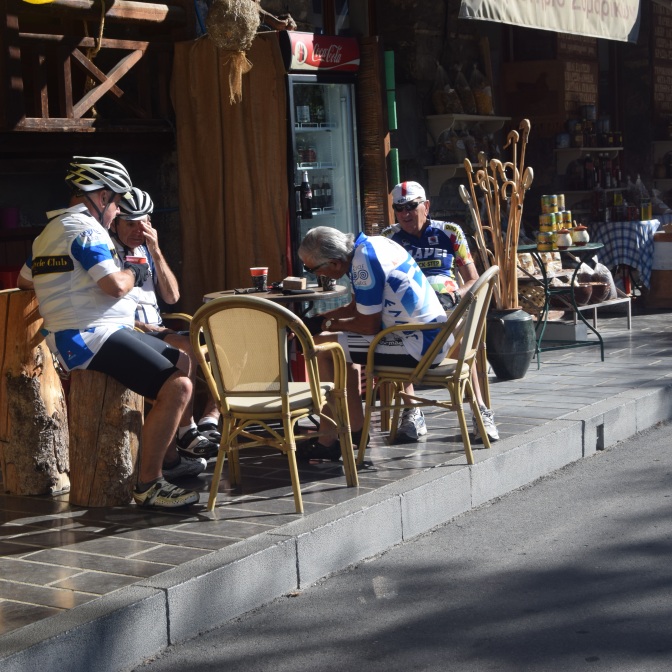 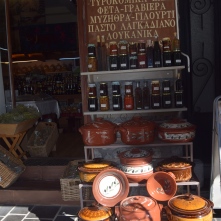 We lost a few of our number along the way – damn, shoulda read those cue sheets, people!  But most of us made it on the appointed route, along the cycleway into Olympia, the home of the ancient Olympic games.

A family hotel, run by a Greek man and his Australian wife – very welcoming, but the only bad bed of the tour, at least for those of us who don’t warm to “lumpy and soft” in the mattress department.

Susanna welcomed us into her kitchen for a ‘lesson’ – no recipes in sight, just a handful of this and a pinch of that.  We made tzatziki and tiropitakia, stuffed peppers and tomatoes from her garden, and greek meatballs…  and ate it all for dinner!  After a few nights of pretty average wine, Peter took matters in hand and selected a few bottles from the host’s rack – that’s better! 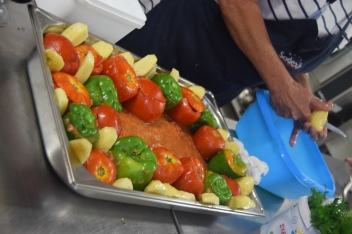 And so to our lumpy bed, looking forward to our tour of Olympia tomorrow!

One thought on “I am not a cyclist”